How To Make Homemade Pickles

Homemade pickles are the perfect pairing to a juicy cheeseburger, a deli sandwich, Bloody Mary cocktail or, my personal favorite, a gooey grilled cheese sandwich! Learn how to make delicious homemade dill pickles in this easy to follow recipe.

Ok, let’s just admit it pickles are good with everything and I do mean everything! The salty, briny garlicky dill goodness, ice cold and crisp straight from the vinegar brine. But, where did the simple side hail from?

Pickles are said to date back to the days of Cleopatra, have been mentioned in the bible and more recently gained popularity when Jewish immigrants began to brine large barrels of kosher dills in deli and restaurants. The popularity of the whole dills became so intense that any self-respecting Jewish deli now serves a complimentary side of the briny snack along with all of their deli selections.

The invention of home canning supplies created a market for pickling in a more convenient and sanitary manner.

A chemist developed a way of sealing the jars with paraffin wax, and then later created what we now know as the canning jar. The canning jar is able to withstand high heat, which in turns reduces the risk of cross contamination and food borne illnesses from bacteria.

During the cooling stage the lid becomes self-sealing by creating a vacuum. The act of canning preserves farm fresh foods for future use during cold winter months or when the products are out of season.

Pickling is not limited to cucumbers. Many cultures pickle everything from cabbage to carrots and cauliflower. My favorite side at authentic Mexican restaurants is pickled carrots, jalapeños and cauliflower! 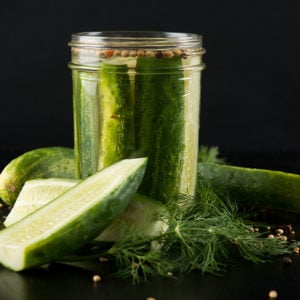 Print Recipe
No ratings yet

Homemade pickles are good with everything and I do mean everything! You'll love this homemade pickle recipe from Spice Jungle.
Prep Time15 mins
Cook Time10 mins
Servings: 4 pints