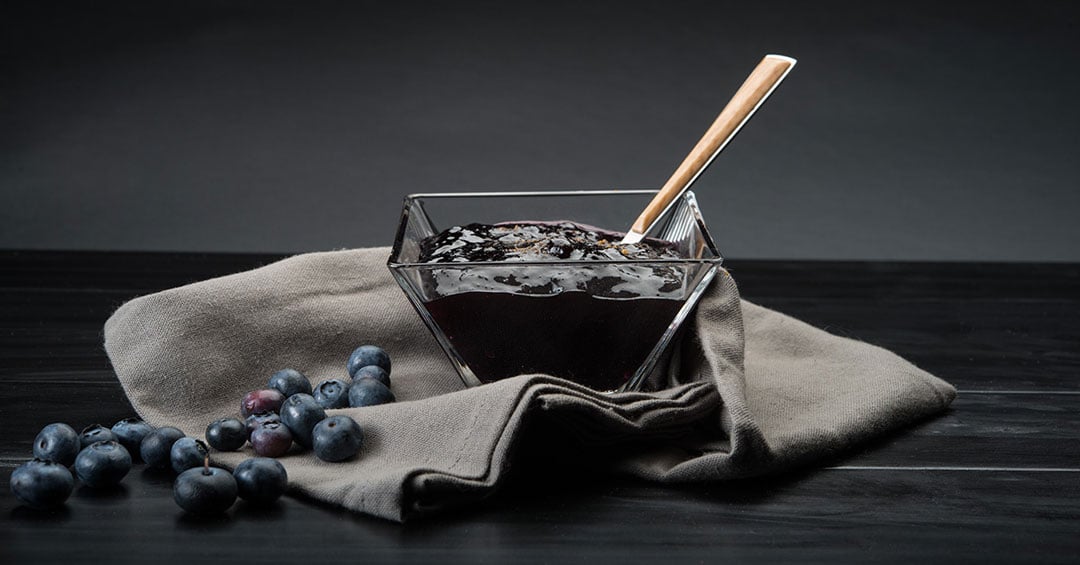 Blueberry season is in full swing here in Michigan. Farmers’ markets and roadside stands are overflowing with the little blue superfoods. One of the best things about blueberries is that they are as versatile as they are tasty. Eat a handful straight up or sprinkle them over your morning oatmeal. Bake them into a pie or make blueberry jam if you want to preserve them for the coming months. While it can be tempting to stick exclusively to sweet applications, blueberries can add a unique twist to a variety of savory foods as well. Case in point? This blueberry chipotle ketchup.

We know what you’re thinking: how can you make ketchup without tomatoes? Well, if you think that sounds strange, you need to catch up on a little history. Ketchup originated in 17th century China, as a sauce made from pickled fish and spices. This concoction made its way to Malaysia, where it was known as “kicap,” a word that would evolve into the English word “ketchup.” English colonists brought ketchup back to the United Kingdom, where they began modifying it by adding ingredients like shallots and mushrooms. Mushrooms soon became the main ingredient in U.K. versions of the sauce, though forms of ketchup based on other ingredients, such as walnuts, were also popular.

Tomatoes are a relative newcomer to the ketchup game, with the first published recipe for tomato ketchup not appearing until 1812. Tomato ketchup quickly took off throughout the United States, and in 1876, F & J Heinz launched their now-famous take on the sauce. Over the course of the 20th century, the ever-increasing popularity of fast food restaurants would make tomato ketchup an inextricable part of American culture.

With the more recent trend toward handmade, artisanal foods, we think it’s time to consider a different approach to ketchup. When you’re taking time to craft a gourmet burger and hand-cut your own fries, why settle for the status quo when it comes to condiments? This recipe combines the familiar ketchup tang with the subtle sweetness of blueberries. Add a dash of chipotle powder to give it a smoky kick, and you have the perfect summer sauce for your burgers, brats, fries, and just about anything else that you want to instantly make more delicious.