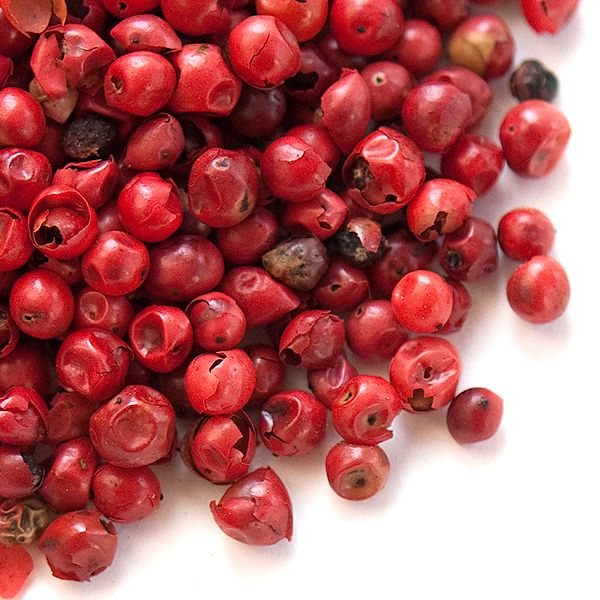 These have an air that's sharp and musky, like an autumn day hewn together by sunlight and crisp winds. Fruity with a peppery flavor, pink peppercorns aren't actually, in fact, a member of the peppercorn family.

Instead of coming from the vine that black, white, and green pepper is sourced from, pink peppercorns are the berries of Peruvian pepper tree that grows throughout South America, but often is grown throughout suburban North America. The slight peppery flavor is due to piperine oil, which is also found in other peppercorns. However, the heat of other peppers isn’t present here.

The flavor of pink peppercorns is rather fruity, though like an academic text, read into it enough and you’ll come to rather fascinating footnotes - pine, juniper berry, and a vague sort of berry aroma exist.

The berries have a chemical that can cause stomach irritation, but only when consumed in enormous quantities. You’ll never need as much pink pepper as you would black, white, or green as pink peppercorns can be a bit more abrasive. Due to their piercing quality, they compliment fatty meats, fishes, and sauces well. In addition, they work well when paired with chocolate.

Pink pepper is also an ingredient in some Chilean wines and has numerous medical properties.

The Baies Rose plant is a small tree that has numerous compound leaves with slender, symmetrical, leaflets on each side of the leaf.

The peppercorns form in clusters on the tips of the branches and can be from white, at an immature age, to pink or even a dark red. Like its cousin the mango (Anacardiaceae family), this plant can also cause allergies.

Schinus terebinthifolius, or the Brazilian peppertree, is a closely related species whose berries are also sold as pink peppercorns in some areas. This pink pepper plant, like Sch. molle, is also a small tree when fully grown. The biggest difference between it and Sch. molle is their compound leaves. The Leaves of Sch. terebinthifolius have fewer leaflets and they are more stubby and rounded, the veins on the leaves are also light green. It has an appearance similar to that of holly and is sometimes used as a substitute for it. Schinus terebinthifolius grows wildly in only a couple of parts of the United States, mostly low lying areas with plentiful water such as wetlands. The branches of this sort of tree intertwine to form a thick barrier that blocks light from reaching surrounding plants. Its berries are almost identical to that of its close relative Schinus molle.
More Information
Related Products

What Everyone is Saying About Pink Peppercorns