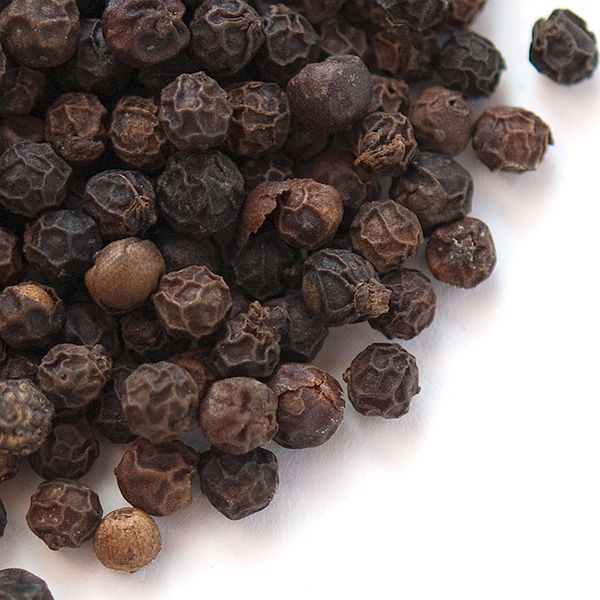 If the diamond is the sacred queen of the gem world, then Tellicherry peppercorns are the equivalent of the peppercorn world. These whole Tellicherry black peppercorns are left on the vine to over-ripen – their size is considerable, like unpolished black pearls, and their flavor is rich and potent.

When archaeologists uncovered Ramses II, they found whole Tellicherry black peppercorns stuffed in his nostrils – this was part of the ritual mummification process. During the Age of Discovery, black pepper and the profit of the spice trade was one of the reasons Portugal, Spain, France, and other European nations sailed the world and expanded the map; to find new sources of spice. Nearly all pepper traded in the ancient world made its way through Malabar, on the Indian Peninsula, and is the main reason the region developed as a major port and trading post in the ancient world. Indeed, whole Tellicherry black peppercorns play a distinct part in human history that is more entrenched in the development of nations than we understand.

Black pepper is used as a spice in nearly all the world’s cuisines as a pungent, spicy, heating agent for food due to the presence of capsaicin and piperine. Teasings of citrus and wood also add to black pepper’s allure.

Tellicherry peppercorns have been left on the vine to ripen considerably. The result is a large, bloated peppercorn with a more distinguished flavor. The aroma is far more pungent and woodsy, with citrus notes that have a more pronounced Navel orange origin.

Tellicherry peppercorns are named after the town of Tellicherry, a commercial town on the Malabar coast where special grafts of black peppercorn vines are grown for these particular berries. Tellicherry was of significant importance during the eras of the spice trade and the town became known for its particularly pungent peppercorns. The town was equally known for growing exceptionally fragrant green cardamom.

What Everyone is Saying About Tellicherry Peppercorns, Black