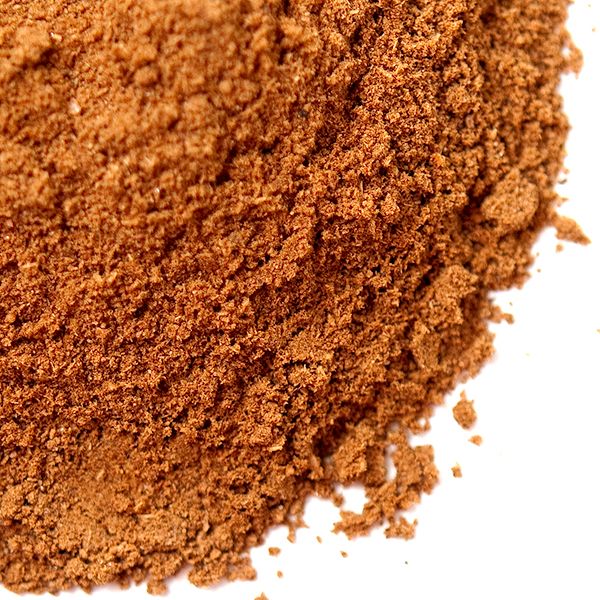 Our star anise powder features an intoxicating scent that induces hunger in the kitchen and lust in the bedroom.

Illicium verum is an evergreen tree that grows in Southern China, Laos, and Vietnam. The fruits that come forth from the tiny pink flowers are harvested and dried into the woody, aromatic, and brilliantly pretty spice we call star anise. These Ceylon-colored poinsettias have eight points, each containing a delicate seed looking like a polished bead.

Our star anise powder contains the essential oil, anethole, which gives both anise and star anise their licorice flavor (the two, however, are not related in any way). The flavor of this ground star anise is fresh, muscular, floral, and penetrating.

China and India both use the spice for medicinal purposes – mainly to treat indigestion. Often the tiny seeds are chewed or brewed into a tisane. The anethole actually does have the benefit of being able to calm down gastric activity while simultaneously freshening breath.

The spice has been used in Asia for years as an ingredient for braises and stews, particularly those focusing on beef, pork, seafood, winter squash, and beans. However, Western cultures have adopted the spice more for confectionery cooking and baking, as well as for flavoring spirits. Add a few star anise to the poaching liquid for apples or figs. If you plan to candy citrus peel, toss a star anise into the blanching liquid to imbue a licorice fragrance.

Ground star anise is a main ingredient in Chinese Five-Spice powder and Vietnamese pho. It’s also part of the Port Royal flavor profile – a mixture of chocolate, grapefruit, and star anise. Use this star anise powder as a rub ingredient for roast pork or beef.

If you bake homemade cinnamon rolls, add a teaspoon of ground star anise to the cinnamon-sugar mixture. Once you smell them baking you’ll never go back to plain ‘ol cinnamon.

What Everyone is Saying About Star Anise, Ground