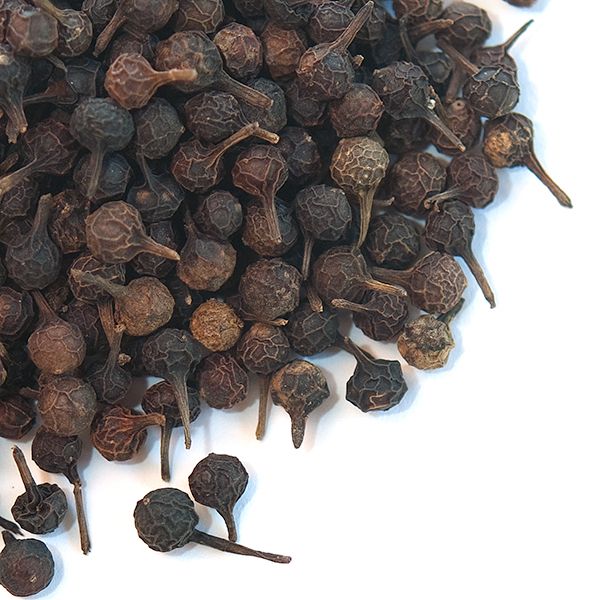 Vicious arguments, economics, and trade regulations ensured that cubeb pepper would lose the pepper war to black pepper. Also known as Java pepper and tailed pepper – due to it being native to Java and the berry’s pericarp tapering off into a stubby tail – the cubeb pepper is a little known ingredient that’s slowly being rediscovered by spice enthusiasts.

Legend has it that the king of Portugal banned the import of cubeb berries from Java to bolster the sale of black pepper to better encourage trade relations with India and the rest of Europe. (Java had a monopoly on the spice as the spice was native to there. Spice merchants would sterilize the seeds to ensure they could not be grown on foreign soils.) This legend sprung from 17th century writer John Parkinson in his book, Theatrum Botanicum. Whether this is true is unknown. However, it might explain the reason why use of cubeb pepper died in the 16th century, giving rise to the proliferate use of black pepper in its place.

A member of the pepper family, cubeb has a peppery, bitter, pungent flavor that’s tinged with a hint of allspice and nutmeg. It’s used in some Iraqi, Moroccan, Australian, and Middle Eastern cuisines and is the pepper of choice in Indonesia and Malaysia. In Europe and the Americas, Java black pepper is rarely seen or used in the kitchen. However, it is used extensively in cigarettes and gin. Cubeb pepper, these days, is the peppercorn of the hipster chef and home cook as this particular berry is still totally underground.

What Everyone is Saying About Cubeb Pepper (Berries)