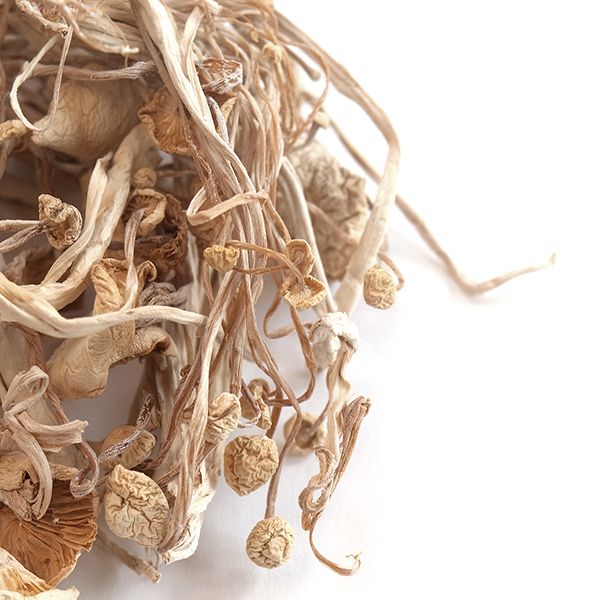 An indispensable ingredient in the Asian kitchen, the Enokitake or enoki mushroom is tossed into salads, soups, stir-fries, braises, and sauces. A light, butter-colored mushroom whose spindly stalk is topped with dainty, fruit-flavored cap.

Developing a pale and floral broth in water that faintly tastes of an unoaked Chardonnay the enoki is one of the most serene mushrooms offered by nature. The taste of dried enoki mushrooms has often been described as that of a green table grape with hints of radish. The soft cap is the most edible part and the crisp stalks offer a crunchy texture. (Though, like a stalk of asparagus, the oldest third of the stalk should be discarded, as it can be quite fibrous.

So what to do with a wine-like broth and demurely radish-y cap? Add to hot and sour or egg drop soup in the last ten minutes of cooking to infuse the broth with a tickle of fruit flavor and for textural diversity. Add some golden needle mushrooms to salads and toss in a mirin-sesame oil-orange juice dressing. Better yet? Add to a stir-fry and you will be in for a serious treat as it just takes the flavor from here to HERE.

Oh, and it’s healthy. Full of vitamins and it is said to help reduce blood pressure. As if you needed more convincing.

What Everyone is Saying About Enoki Mushrooms, Dried