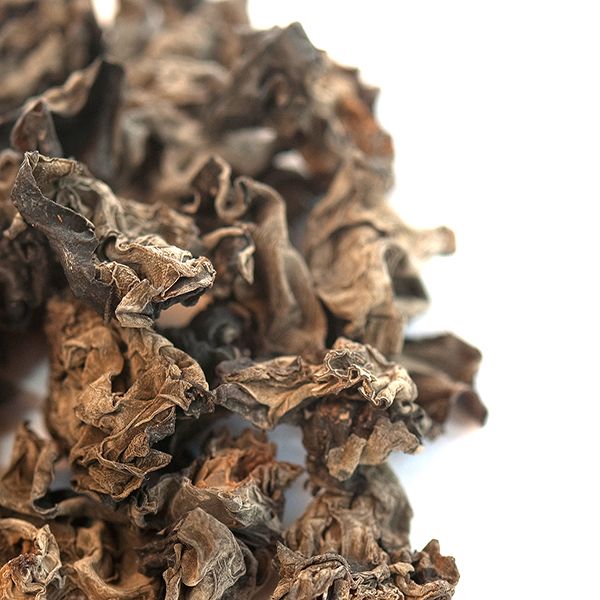 Some mushrooms are like cheese: they smell odious on the outside and the stench can cause the wallpaper to peel. But the flavor? The flavor is mild, sophisticated, and just a teensy bit addictive. Meet the black fungus, or cloud ear mushroom: the stinky cheese of the mushroom kingdom.

The smell is that of dark soy sauce and reduced Chinese black vinegar: dark and pungent. It’s a scent that might make you eager to take deep breaths of it or toss the whole bag out the window. However, once reconstituted in water the smell dissipates and all that’s left is the innocent mushroom. Bite into one and enjoy the soft surface, meaty texture and toothsome crunch. The flavor is not at all like the smell. Think a weak black tea, bitter and sweet.

The dried cloud ear is mellower than the wood ear mushroom (black fungus) and has a black and grey appearance as opposed to the wood ear’s black and tan. Dried black fungus mushroom is useful in many classic Chinese and Japanese soups and stir-fries. To mix it up, reconstitute it in water and mince it, add the mushroom and the broth to a Thanksgiving cornbread and sausage stuffing to give it a bit more textural intrigue and Asian flavor.

What Everyone is Saying About Black Fungus (Cloud Ear), Dried