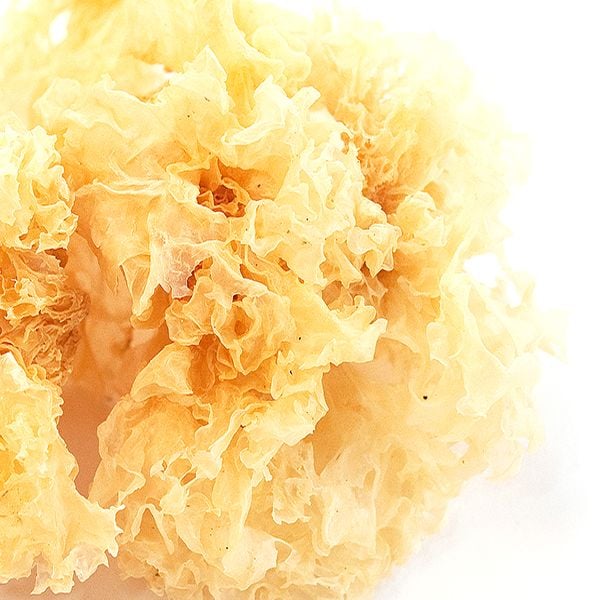 An ancient mushroom used in China, India, and Japan not so much for its flavor but for its cartilaginous texture and healing properties. Thought to ease tumors, mollify respiratory illnesses, and ward off coughs this mushroom is often added to simple broth soups or Chinese dessert soups.

Also known as the Silver Ear mushroom, White Wood Ear fungus, and Snow Ear fungus the Cauliflower mushroom has long been a staple in traditional Eastern medicines and is often prescribed for tumors or respiratory ailments. It is often used as a cooling element to ward off hot diseases and bring balance to the body’s internal temperature. If you’re suffering a cough then perhaps a simple broth or dessert soup like lok mei might be just what you need.

Eastern cauliflower mushrooms require a bit of extra attention than other dried whole mushrooms. They must soak for nearly an hour in a large amount of water as they will greatly increase in size. Afterwards the petals must be washed thoroughly to ensure that all the grit has been filtered out of their folds. The reconstituted mushroom will be frilly, cartilaginous, and milky white.

You’ll also find that it doesn’t have much of a flavor. In Chinese cuisine, texture is valued just as much as flavor. The Cauliflower mushroom offers a texture that few other ingredients can: soft, light, smooth, and crunchy. It beguiles the eater and makes the meal all the more playful.

What Everyone is Saying About Cauliflower Mushrooms, Dried